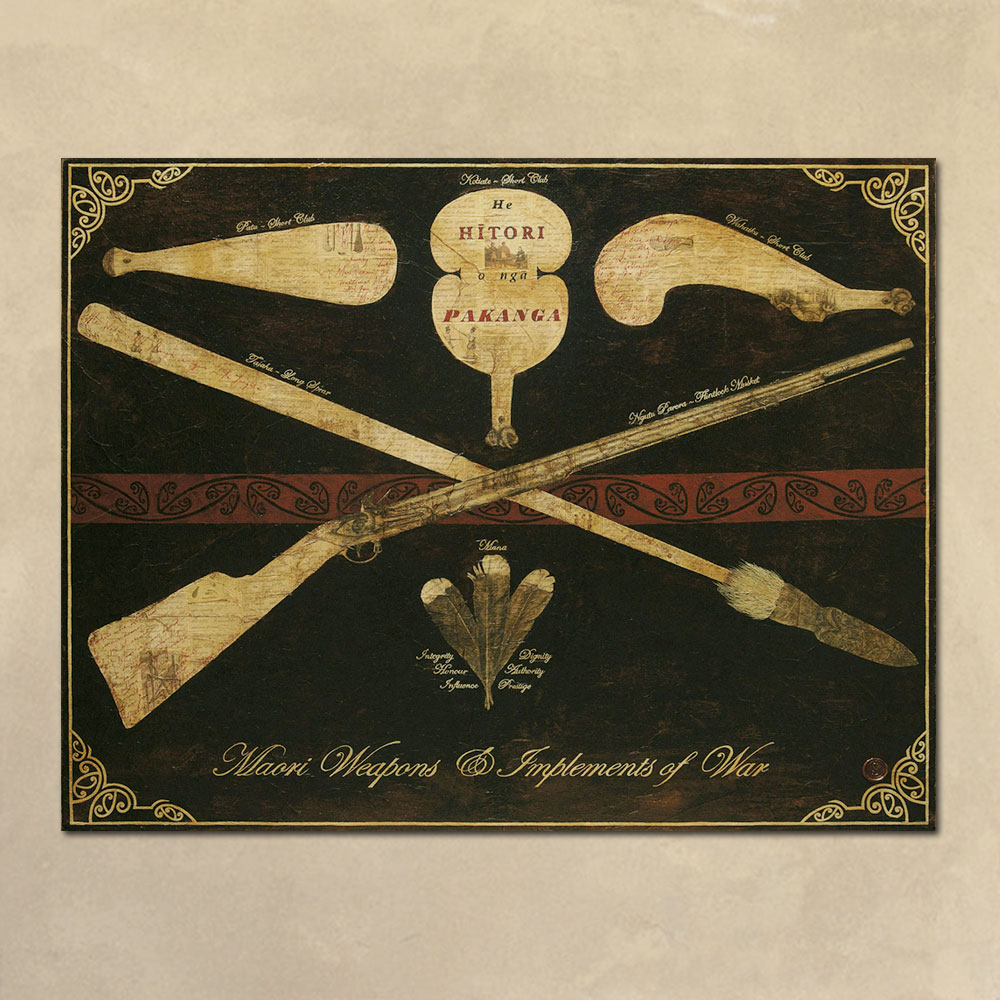 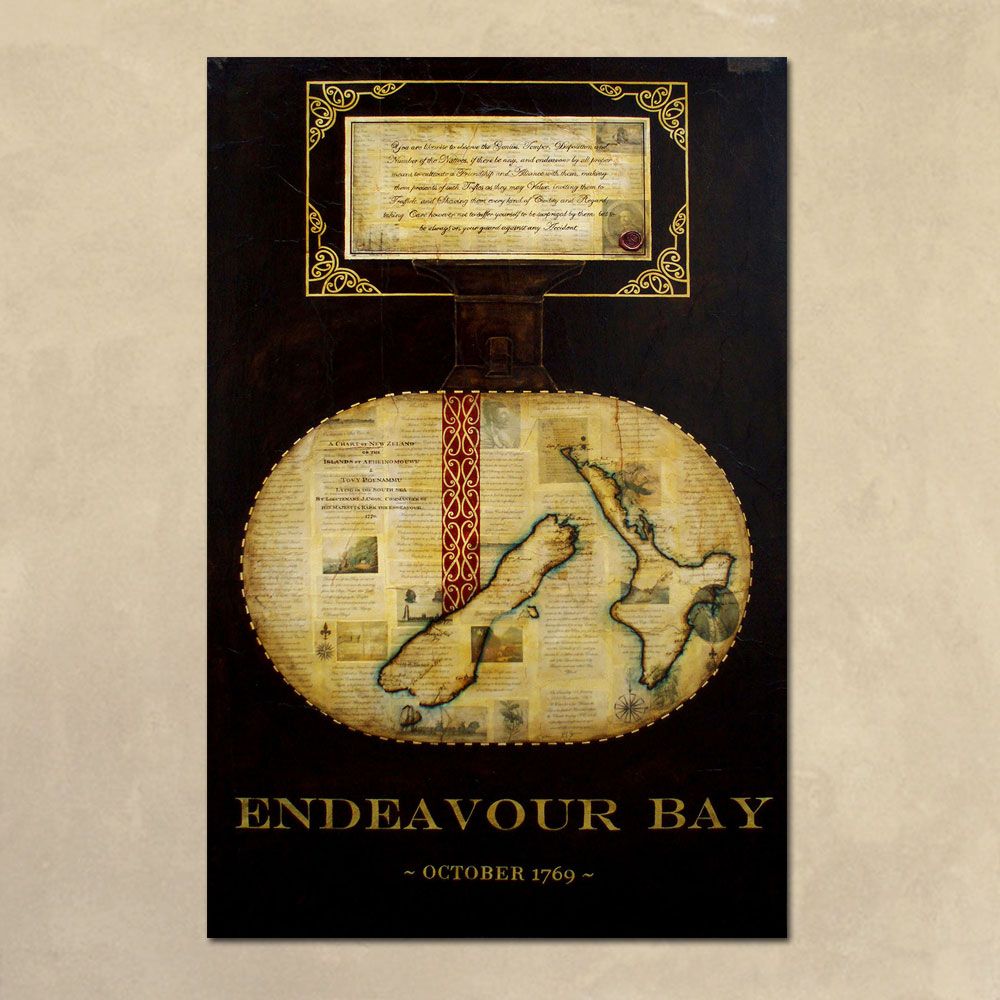 The design of this work was inspired by the monument at Poverty Bay of which I visited in January 2007. The round stone that Cook is standing on is a globe marked with his great voyages.  Poverty Bay was originally named Endeavour Bay as it was the first part of New Zealand that the Ship ‘Endeavour’ weighed anchor. However there was a skirmish with the locals and the Endeavour had to leave without any fresh supplies or positive relations with the local natives.

Red kowhaiwhai design: Patiki or flounder, a symbol of hospitality

The box at the top of the art work includes the list of people on board the Endeavour.

“You are likewise to observe the Genius, Temper, Disposition and number of the Natives, if there be any, and ENDEAVOUR by all proper means to cultivate a friendship and alliance with them.” 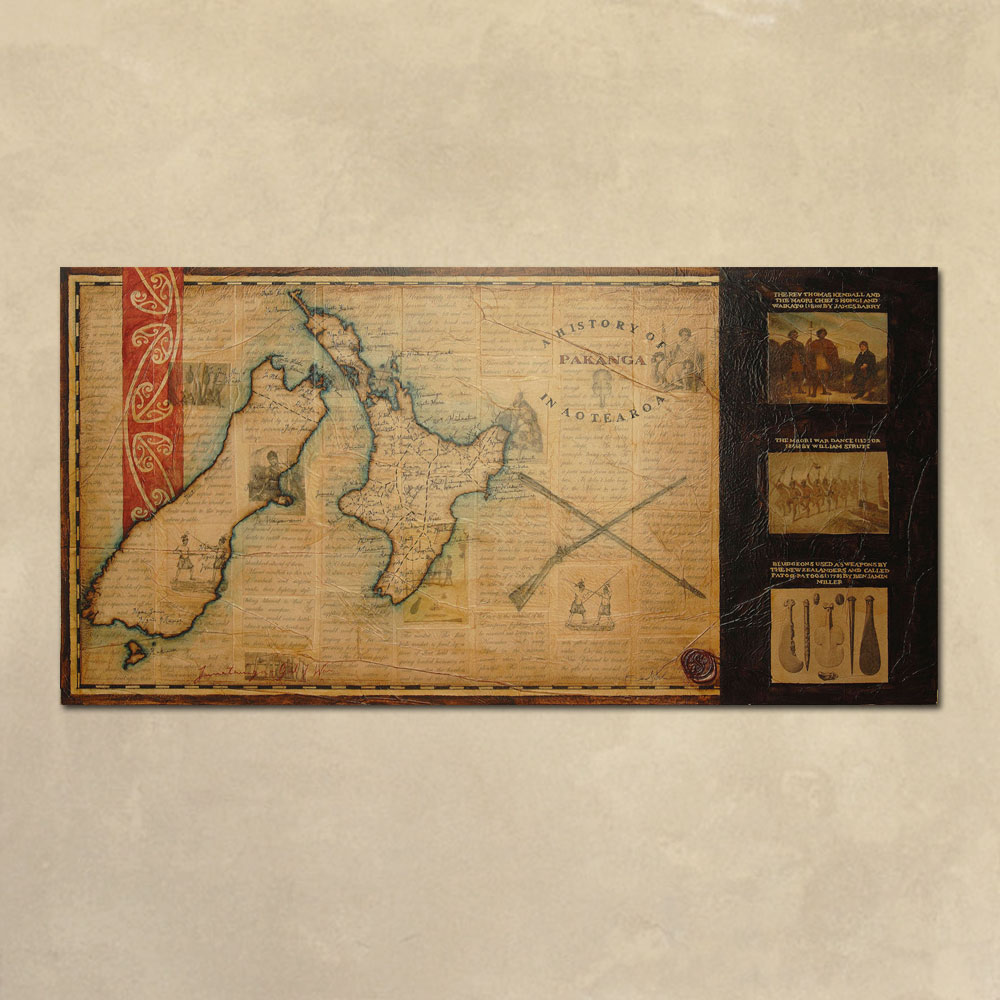 The map of New Zealand shows all the tribal districts. 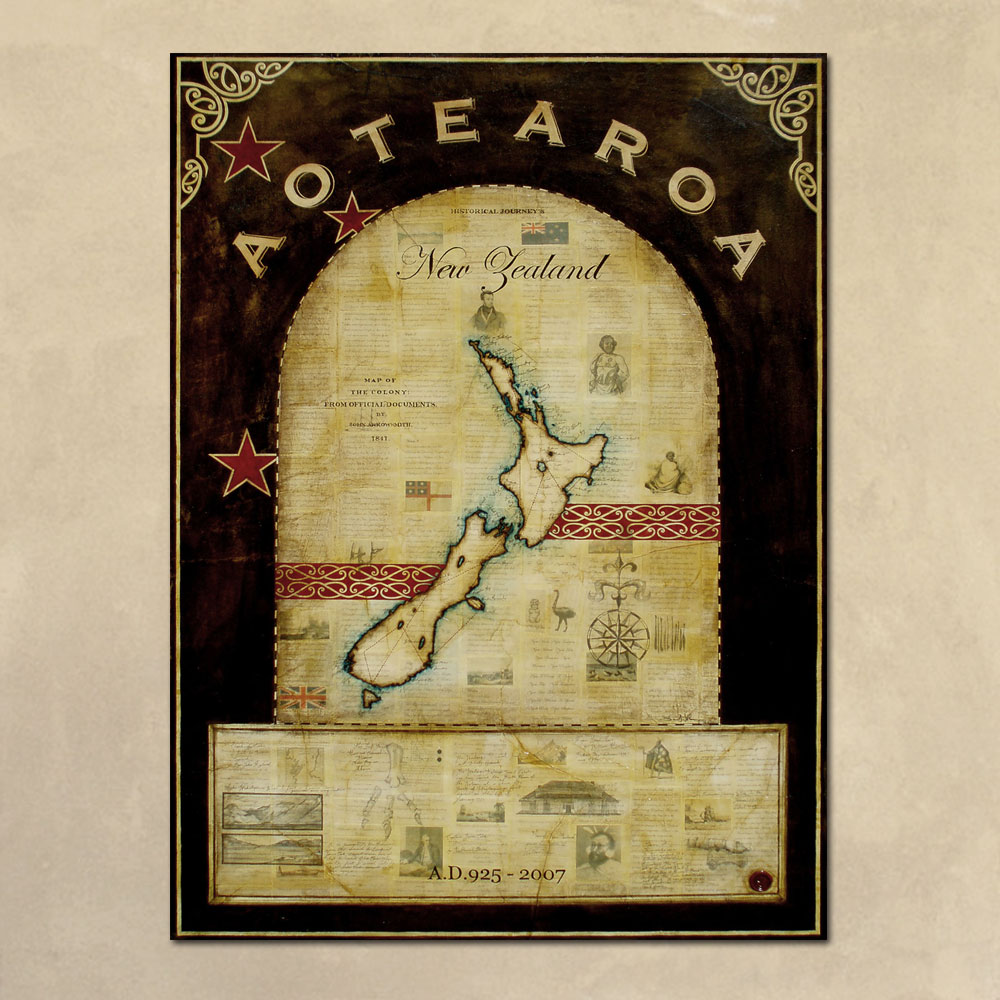 A journey can be an expedition across land and water or it can be a path through time. This work is about both; it outlines important historical moments in time for Aotearoa; it is about the physical journeys that the early Maori and European immigrants made along with my research journey I embarked on in January 2007 of which I have marked with the red dotted lines.

The Date – A.D.925 – The approximate date that Kupe, the legendary Polynesian explorer first arrived in Aotearoa. – 2007 – The year I embarked on my journey throughout the North and South Islands.

The pencil drawings on the lower part are images I saw whilst traveling, they include Waitangi House and the bones of a Moa’s foot among other things.

Red Kowhaiwhai Design: Patiki or Flounder, a symbol of hospitality (a matter of very great importance to the Maori of old and new) 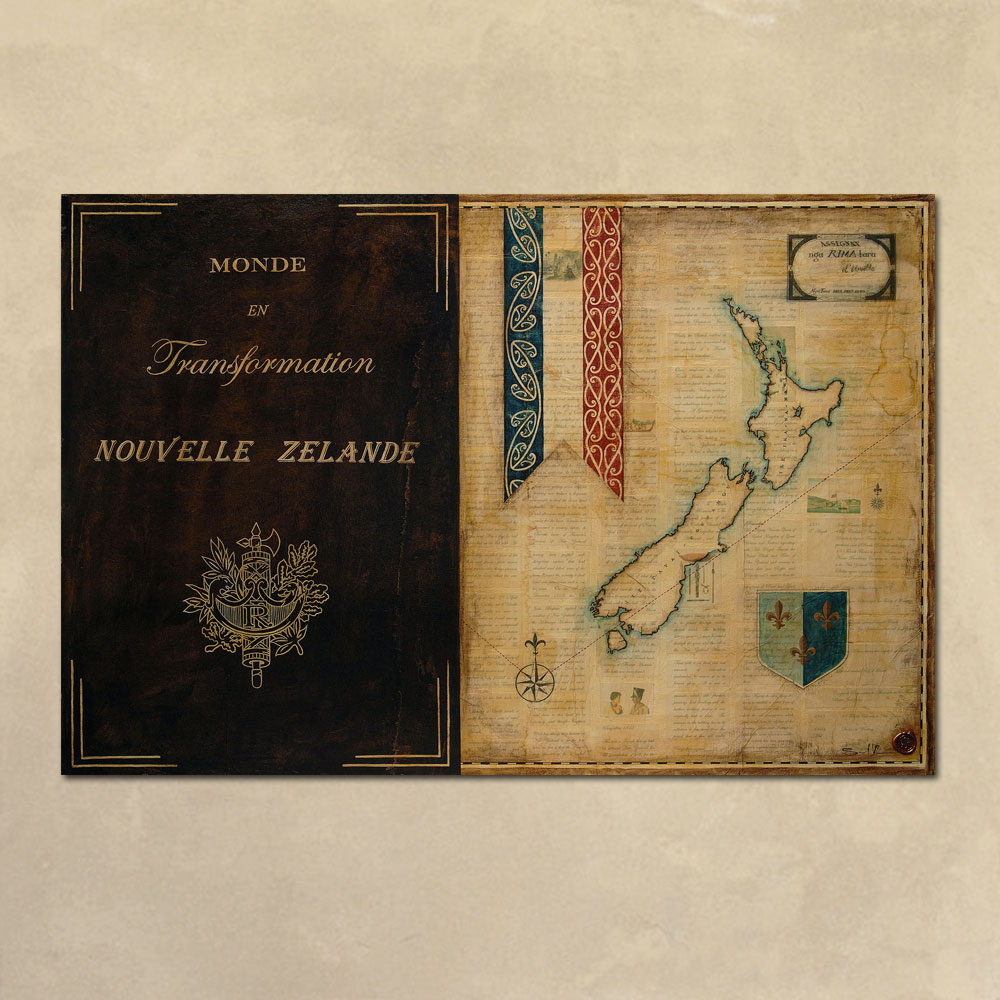 The Map:           The title and some of the information on the original map is what is written on the left hand side of the painting including the date it was created.  The original map was done by Vincendon Dumoulin on the discoveries made by d’Urville during his visits in New Zealand.

Fleur-de-lis:       The design can be found in many places long before heraldic times, as far back as Mesopotamia. It is essentially a stylized flower, and served as a decorative element and became associated over time with royalty, especially in the High Middle Ages.

The Roman Catholic Church ascribed the lily as the special emblem of the Virgin Mary.  Due to its three “petals,” the fleur-de-lis has also been used to represent the Holy Trinity. Joan of Arc carried a white banner that showed God blessing the French royal emblem, the fleur-de-lis.

1) United Tribes of New Zealand.  This flag was created before New Zealand was a British Colony.  March 20, 1834, 25 Chiefs from the Far North gathered at Waitangi to choose the flag to represent New Zealand.

Kowhaiwhai Design: Patiki or flounder. This is a symbol of hospitality from the Pare Hauraki area. The kowhaiwhai is done in a pale blue to be reminiscent of the French colours used during that period.

13 December, the ‘St. Jean Baptise’ rounds Cape Marie Van Diemen and passes the Endeavour with neither Ship sighting the other due to bad weather conditions. 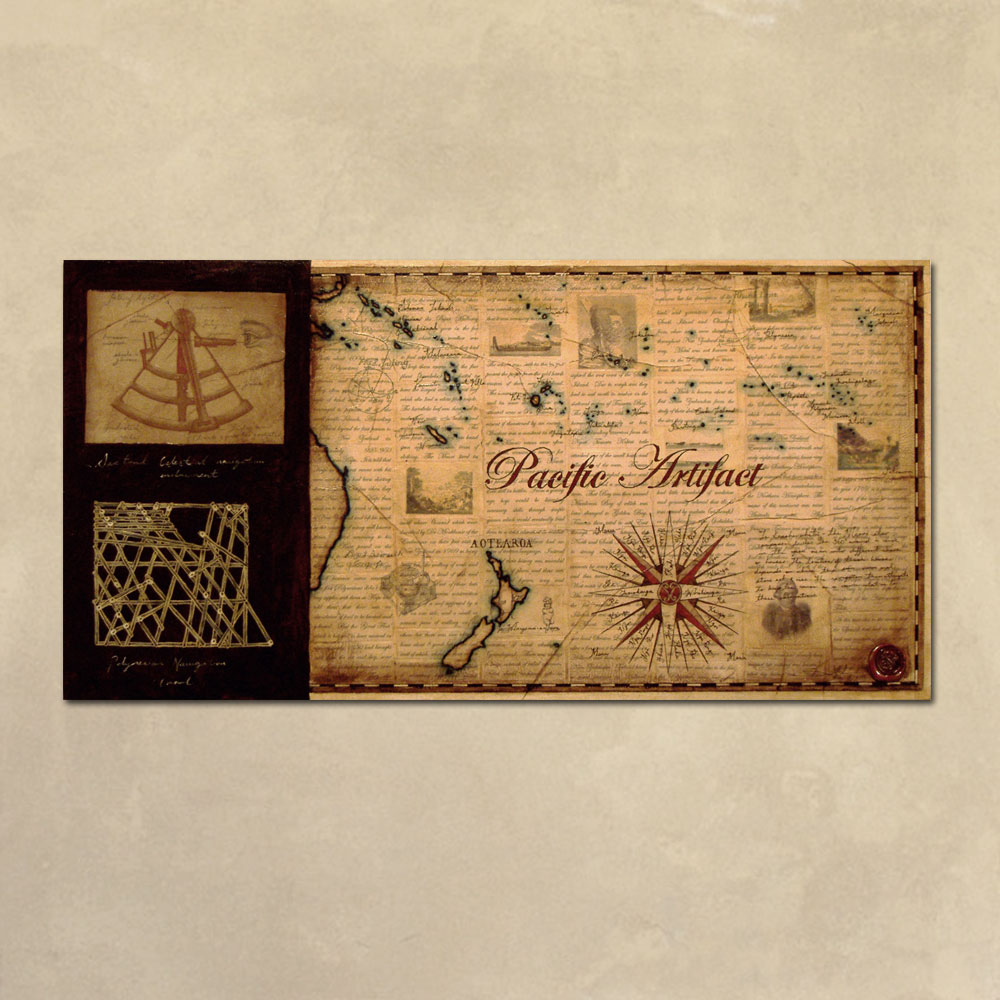 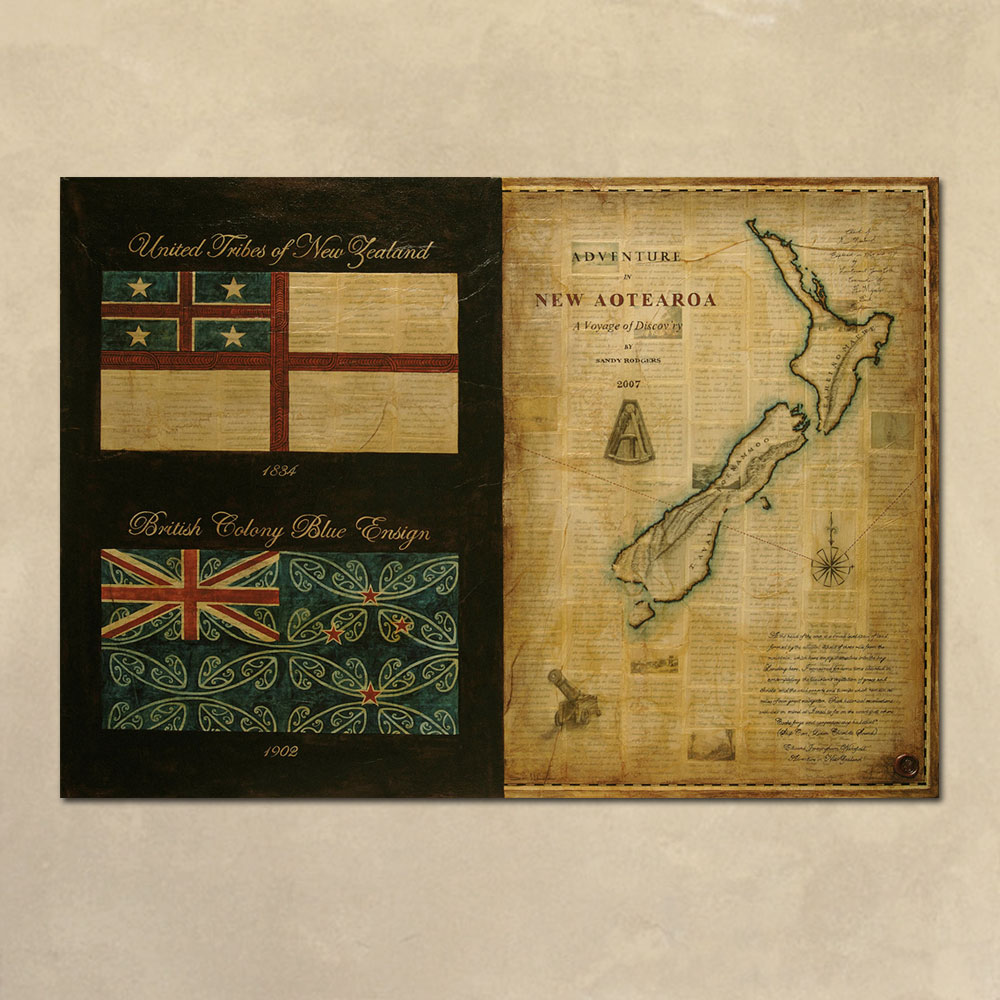